Thank you for your patience while we retrieve your images.

In regional areas, Australian White Ibis (and Straw-necked Ibis) are sometimes called ‘the farmers’ friend’, due to their habit of flocking into areas afflicted by plagues of locusts and gorging on the ravaging hoards of insects. In urban areas, however, where many Ibis scrounge for a living by scavenging at rubbish tips and in city parks, and their plumage becomes soiled by refuse, they are sometimes disparagingly referred to as ‘tip turkeys’.
Birdlife Australia
Wikipedia 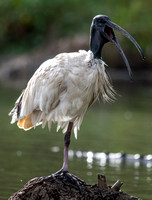